Here’s the first post of 2012! A very happy new year to all you bevvies!

Many apologies for not having posted in the past few weeks. As any good explorers know, one must go far and wide to obtain the treasures of the world — and boy, have I. Singapore was my destination! The wondrous city/country/island and my many friends there showed me the greatest hospitality – which included much alcohol.

So, I have returned from my epic exploration with much bounty to share (I even have pictures). Let’s get to it!

To not completely come off as an alcoholic, I’ll include a variety of beverages that Singapore had to offer. First, I present to you a Hawker center (Singapore’s solution for regulating food carts and stands) classic.

This is the Milo Dinosaur. This cup of malted chocolate milk isn’t your average cup of “Yoo-hoo.” It’s creamy (from the condensed milk *drool*); it’s cold (which is friggin’ FAN-tastic in the Singapore heat); and it’s topped with extra malt powder which turns into that slimy, chocolatey goodness that lingers at the bottom of your cup. Luckily it comes with a spoon: yum.

And here is the warm alternative which is popular in many Hawker centers: Pulled Tea.

This take on the popular Asian milk tea drink is a warm delight. Just like the Milo Dinosaur, it’s real creamy, ahem condensed milk. This simple drink’s taste is only half the fun. The frothy bits at the top all come from the pouring motion. Ain’t no thang.

Ok, enough sober crap. Onwards, to the alcohol (the reason why we’re all here…)!

First off: a beer. Tiger Beer is Singapore’s national beer. It was average. Cheers.

I can’t say it was anything phenomenal, but I figured I might as well try it. One does not simply fly across the Pacific Ocean to not try the local beer. Like the adage goes: when in Rome…

Ok and here’s the last of the picture series. Here we have Singapore’s speciality: The Singapore Sling.

Firstly, excuse the out-of-focus-ness.  Secondly, holy sh!t this was not what I expected. My friends and I went to the place where this drink originated: The Raffles Hotel. Having done zero background research on the drink, I was decently bamboozled at our order (my friends and I were also surprised to learn that you could toss your peanut shells on the ground – it creates a nauseatingly crunchy texture to the ground).

For a drink that was birthed in the watering hole of one of the most historical hospitality establishments of the colonial world, I was not expecting a orangey-pink monstrosity (with a maraschino cherry to boot). I think the story goes that the colonial manly-men of the day needed to mask the foul taste of their gin.  Thus, pineapple juice, grenadine, and sweet and sour mix was used to mask the taste. My hat is off to you, ye olde colonizers – never have I seen such shameless sweetening of a drink. Wear your man-parts with pride!

Anyways, sarcasm and colonialism aside, It was a decent drink. Admittedly, this is a departure from the original recipe, but I couldn’t complain. The foam was a nice touch; the sweetness and tartness put it somewhere between “Peeps” and “Ring-pop”; and there was an absolute lack of alcohol burn, despite the three liqueurs and heavy-handed pour of gin. An interesting drink, for sure.

Just some pretty pictures of Six Mile Creek Vineyard, only a ten minute drive from Cornell campus. We were  too intrigued by their many drinks (they make wines and distill liquor) to take notes. 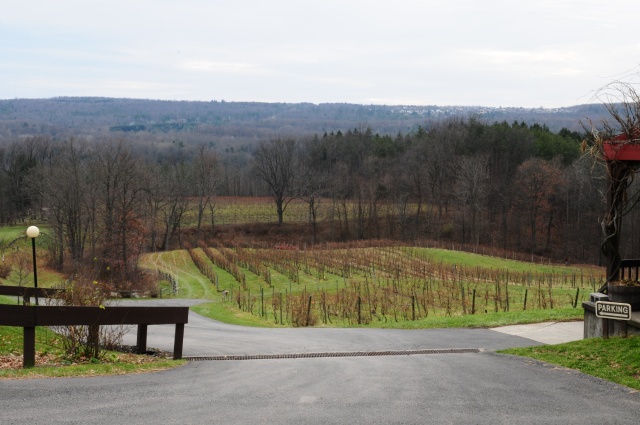 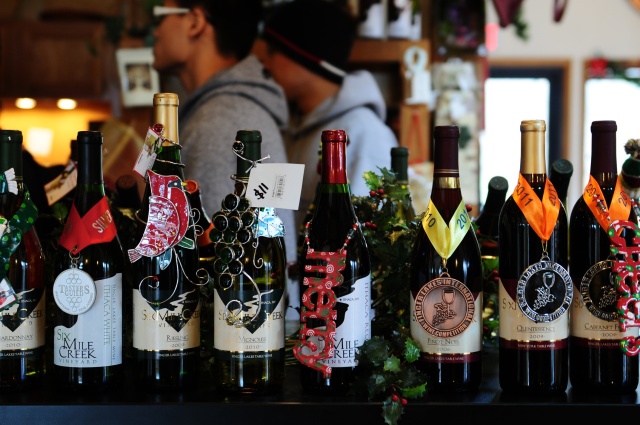 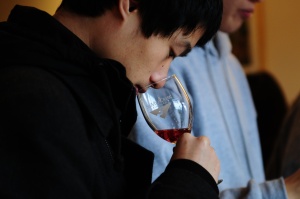 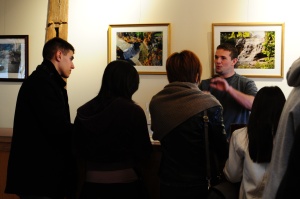 One of our favorites was their number one seller, Pasa Tiempo, a sweet wine with hints of lemon and honey. They also distill their own vodka (made from grapes and oh-so-smooth), gin, limoncella, orangecella, and grappa!

Thanks to Derek for a great tour and a fun afternoon!

As promised, I present to you more of my cocktail ideas. I was given the opportunity to bar tend a formal, and I had to come up with a few winter/holiday-inspired cocktails. After a bit of brainstorming, here’s some things I came up with…

Instructions: Build the drink in a highball glass full of ice. Use a mint leaf for a garnish.

Yes, I realize this one’s a bit stiff. The true gentleman’s drink, the gin and tonic, with a minty, holiday spin.

Build these babies in a shot glass and pass around…

Instructions: start with the alcohol with the lowest specific gravity and then go up from there: Rum, Irish Cream, Amaretto, and then the Coffee Liqueur. The idea is to “layer” the shots. Use the end of a spoon to slip the heavier alcohols to the bottom on the side of the shot glass.

This is all very hypothetical at the moment. I need to see if the colors work and see how to improve the layer effect. I’ll give it a go this weekend and let you all know how it goes.

Many apologies for my recent absinthe (bahahaha). I got caught up with life, and sadly, life did not involve too much mixologizing.

HOWEVER! That doesn’t mean there weren’t any ideas sloshing around in my head.  In an event that I had to coordinate in the past few weeks, I took it upon myself to create a classy little number.

This upstanding group of young professionals that I wanted to impress deserved something  more than just a re-hashed “coke and rum” shenanigan. They needed a sophisticated beverage. Something dynamic that could be nursed… or chugged. Something that induced ample salivation… yet impressed members of the opposite sex.

Behold! I give you… a treasure…

Instructions: Build in a highball full of ice.

This is a great, yet simple drink. Caramel notes from the gold rum compliment the amaretto fairly well. I’m still thinking of an appropriate garnish… but the base works wonderfully! Whiskey acts as a comparable substitute if you’re into that kind of thing. A blended whiskey, preferably.

Next time, I give you two sexy cocktails. That’s right. Two. Deuce. Dos. A pair. More than one and less than three. I’ll shut up now.

Blend the ingredients together, liquefying the ice and candies.

So, Calvin and I came into possession of a massive bag of candy this past week. As a testament to just how much willpower we have, we didn’t end up eating ourselves into diabetic blindness. However, this meant a good amount of candy was left in the bag by Friday. Neither of us wanted it taking up space, but we couldn’t waste such a glorious testament to how childish we are. So, I threw some Warheads (my favorite) into a blender, added some Bacardi and ice, and just let the bastard grind for a bit. What emerged was a frothy green abomination, challenging our sensibilities. It was an absurd collision of childhood and adulthood, gurgling in the highball; I’m almost certain I faintly heard it say “kill me.” We were less than enthusiastic about tasting what looked like a bad idea, but I manned up and decided to dignify my creation with a sip. I sloshed it around, looked into the glass, and took another; the drink’s tangy-sweet mix had just enough of a bite from the rum to make it taste right. We were astounded that such a stupid idea turned out well, but it looks like it did. Not only does it taste good, it’s a great talking point at parties when people ask just what the hell it is. I recommend, if you choose to embark on this trip into absurdity, that you experiment with it, though (especially with how it looks. Try to make it less…vomity.)

Gin and Bear It

2 shots U.V. vodka or Blue Curacao (the latter if you like sweeter drinks)

Mix it all together.

Even drunk Lucio can make delicious concotions, ladies and gents. At a recent friend-of-a-friend’s house party, I got my hands on some U.V. It was my first of many adventures i plan on having with that tangy, delicious liquor. Blueberry usually doesn’t agree with me, too, but for some reason, this stuff was just perfectly balanced between sweet and sour to keep the berry sugar from overtaking the taste. I had, in my hazy inebriation, the great idea to mix it in with some cola we had on the drinks table. Before I could taste it, though, somebody poured me a shot of gin. With rapier wit (just kidding,) I convinced my cohorts to let me just add the shot to my drink. I feared the worst, cringing at the thought of having wasted the drink. However, some magical chemistry shit had occurred in that sloshing Solo cup: the drink tasted fresh and tangy without taking on the usual sweetness-enhancing properties gin tends to have. Needless to say, the drink was immediately filed under “THINGS TO REMEMBER TOMORROW MORNING.”

A side note: I added to the recipe a possible substitute for UV with Blue Curacao, in case tang doesn’t sit well in your tastes; be warned, however, that I haven’t tested this mix, and it could be (and probably is) ridiculously sweet.

Leave the basil in the vodka shots, muddling it a bit to release the flavors. Leave it to sit for 30-45 minutes, then strain the basil out. Mix everything in the lowball. Garnish with a leaf of basil and/or a lime wedge.

Calvin’s apartment is a fantastic cyclone of random, unneeded shit from other people and places; it’s an amalgam of every college apartment you saw on The WB in 1997. He says he spent the summer acquiring odds and ends while he worked up here in the Ith. One thing stands out, to me at least: the lone basil plant growing in the windowsill. Nobody knows where it came from, it just sits overlooking Collegetown in mystery (that doesn’t stop us from making king’s cup rules that involve eating basil leaves as punishment, though…) Anyway, the notion of making something with the basil has been on our minds since the year began, and one Friday, we finally had a breakthrough with the Basilicola. It’s almost serendipitous, too; we had the idea to strain vodka through the basil, but ended up absentmindedly leaving the shot glasses on the counter for some time. Think of this drink as citrus pucker on a budget. Lime juice is cheap, generic cola is cheaper, and…well, no, the basil was only free for us, but you understand.

Welcome to CU's Beverage Club blog, home to all your liquid needs.

beverage club
Create a free website or blog at WordPress.com.